Lizzie Lawrence had planned this drive from Bromley Hall, by kind invitation of Mr & Mrs Beynon Brown. It had been intended that the boxes and trailers would be parked on grass, but recent wet weather meant we were in the farm yard.

More rain was forecast, and so wet weather gear was de rigeur.

The route took us over relatively flat country to the west of Cockshutt and north of Ruyton XI-Towns, and six turnouts set off at intervals. We soon crossed the River Perry, on through Wykey and Eardiston, meeting up with Stewards at Lane End. Here, four of the turnouts turned for home, but the other two elected to do the complete route of some 18 miles. They were rewarded with a view across the ex RAF Rednal airfield – home to an Operational Training Unit using Spitfires for instruction from 1942 – 46.

Then it was homeward via Tedsmore Hall and the oddly named hamlet of Grimpo and over Grig Hill.

Mrs Beynon Brown had ridden on the carriage with Russell, and Mr B-B kept an eye on us all from his car appearing at least twice to make sure we didn’t get lost.

The forecast rain didn’t materialise, and we had our picnic in front to the farm house finished off with tea and cake from our hosts. 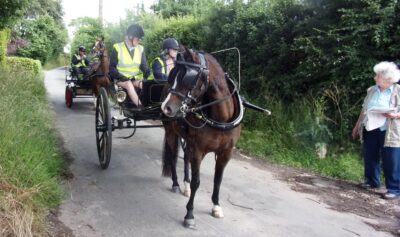 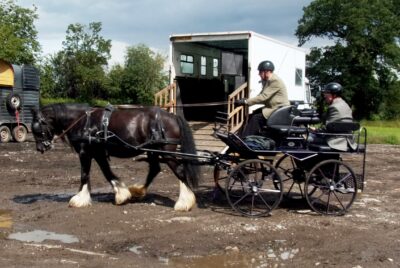 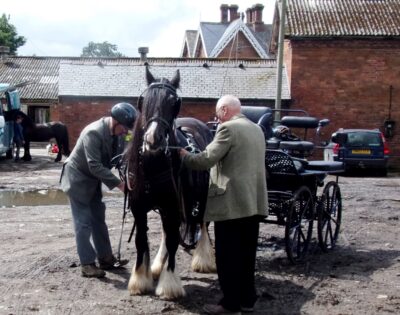 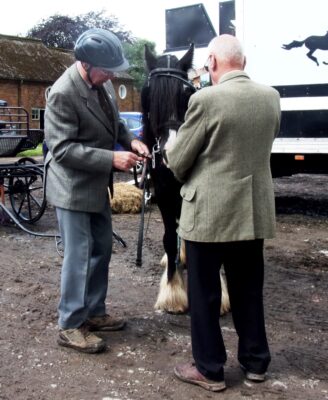